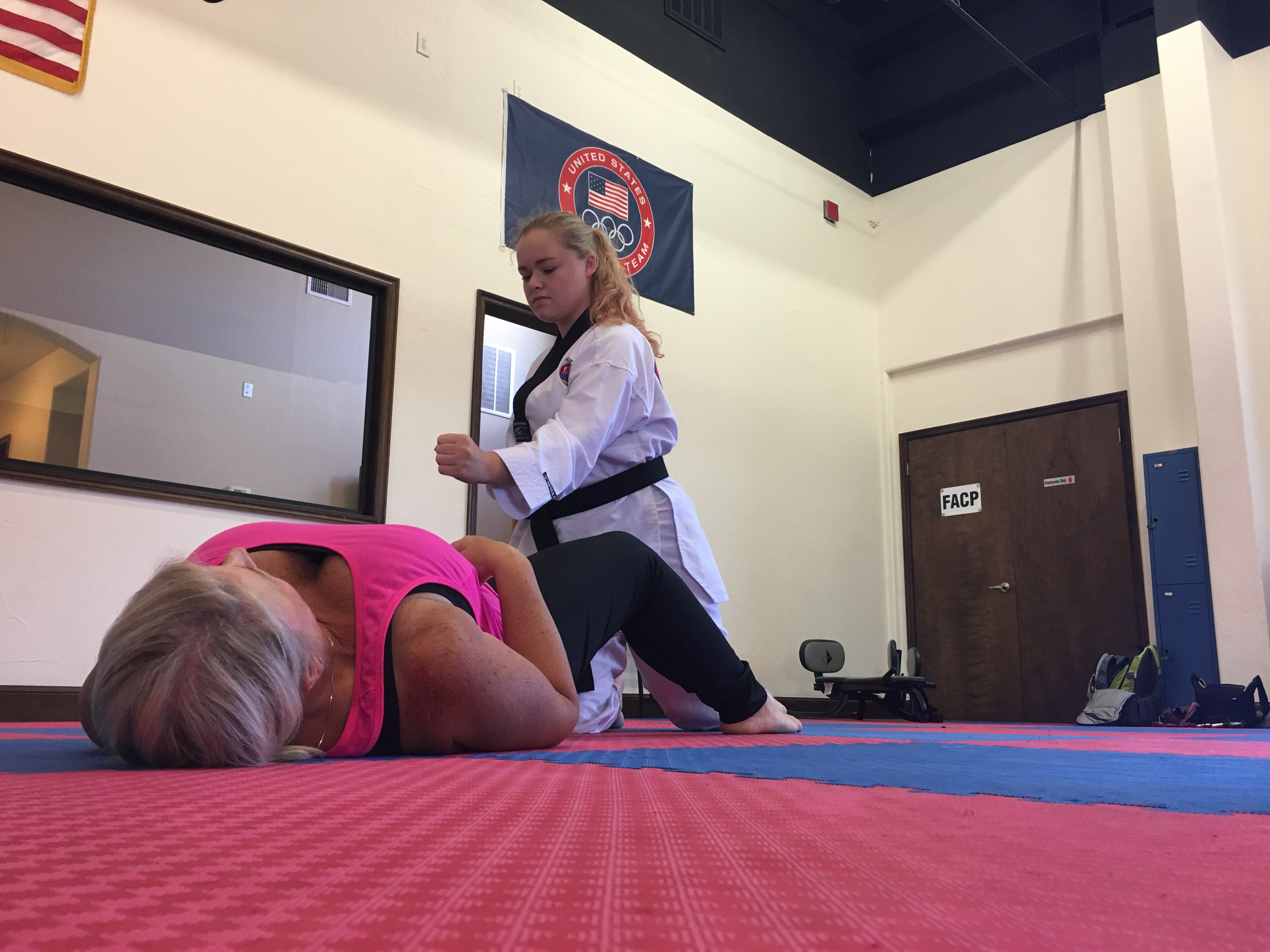 One Oklahoma man is using his combined passion for martial arts and counseling to teach women how to help prevent sexual assault.

A recent study by the Center for Disease Control shows one in four women will experience an assault in her lifetime. There are resources for women available, but only a few focus on preventative care and instead offer treatment for coping.

Jeff Fine-Thomas is a marriage and family counselor trying to change that culture by offering self-defense courses. He has a second-degree black belt and has been practicing Taekwondo for 10 years. He’s tall and relatively lanky, with graying hair, a thin pair of glasses and a signature therapist smile.

He teaches classes at Poos Taekwondo in Edmond, Oklahoma, in a large building in the middle of a suburban area.

The idea for a women’s self-defense class came to him about a year and a half ago when he came across a study by Charlene Senn, professor of psychology at the University of Windsor. The study said that self-defense classes can reduce women’s risk of sexual assault by 46 percent.

“That’s a huge number,” Fine-Thomas said. “If you can put it into context when you buckle your seatbelt in your car, you’re reducing your risk of death by about 45 percent. So it’s the equivalent of buckling up.”

After reading that, he knew he could use both his experience as a marriage and family counselor and his love of martial arts to apply what he learned from the study.

Fine-Thomas approached Jason Poos, owner of Poos Taekwondo, asking if he could offer a free class for women.

Poos was happy to help.

When the program first began, Fine-Thomas expected the serious subject matter to elicit a somber response. The opposite happened.

Many women couldn’t contain the urge to laugh, sometimes losing their balance and falling over. This, to Fine-Thomas, was a sign of victory.

“I realized that we met a goal that we wanted to meet, which was that we did something women wanted to do, and ever since then, every class has been like that,” Fine-Thomas said. “There’s a ton of laughter, and frankly, it’s just a hoot.”

Some experts feel wary about self-defense classes. They claim those classes can sometimes put the responsibility on the victim instead of the perpetrator.

One of those experts is Mackenzie Masilon. She’s seen this happen several times as a rape prevention coordinator at the Oklahoma Coalition Against Domestic Violence and Sexual Assault.

However, Masilon said that Fine-Thomas’ more comprehensive approach, including information about risk factors, unhealthy relationships and identifying the characteristics of coercive men could make his class more effective than the self-defense classes she’s seen.

“In a program where there are these root causes [are] being addressed, and it’s an empowerment program, I think that’s a great idea,” Masilon said.

Several women have found Fine-Thomas’ class to be particularly effective. One of those women is Sandra Elrod.

Elrod has blonde hair, piercing blue eyes, and a deep Southern accent. She arrived at the studio in her exercise clothes after looking for a new job as an accountant.

You would never know from her confident manner that Elrod, or “El,” as her friends call her, is a survivor of sexual assault. Elrod grew up in Missouri and was abused by her father. She said she had very few resources available to her growing up.

After she was removed from her home at 10 years old, Elrod was only given one counseling session as a child.

Her father was convicted of abusing other children and put in jail years later.

“Had domestic abuse been more heightened back in that time when it was occurring to me, it would not have affected four other children,” she said.

Last fall, Elrod participated in Fine-Thomas’ class after hearing about it from a friend.

Fine-Thomas taught her how to use taekwondo to defend herself against an attacker, and she described the process as “empowering.”

“As an adult today, I can say I’m more apt to defend myself because I have more will,” Elrod said.

She said the class instilled her with such confidence that she didn’t feel triggered by the material.

“I’ve already gone through the abuse all my life, and I did fear that it would bring up some emotions I may not be able to handle,” she said. “But it was such a well-planned class that it allowed by to walk through the instructional aspect without digressing back to the ‘woe is me’ factor.”

Elrod has since become a counselor with an organization called Abuse No More.

“We’re so much better than the people who prey upon us,” Elrod said.

Classes like Fine-Thomas’ are often taught by women. Because of that, he has been met with some criticisms and apprehension.

When he began his research, Fine-Thomas reached out to Charlene Senn, the woman whose research inspired him. She told him the class was only meant to be taught by women.

Fine-Thomas said he has mixed feelings about the response. He acknowledged that the presence of a man may intimidate a survivor, but he said his background in therapy and martial arts makes him the best person for the job.

“That’s where I stand, and I hope it works,” Fine-Thomas said. “We’ll let them decide whether or not a male can teach it.”