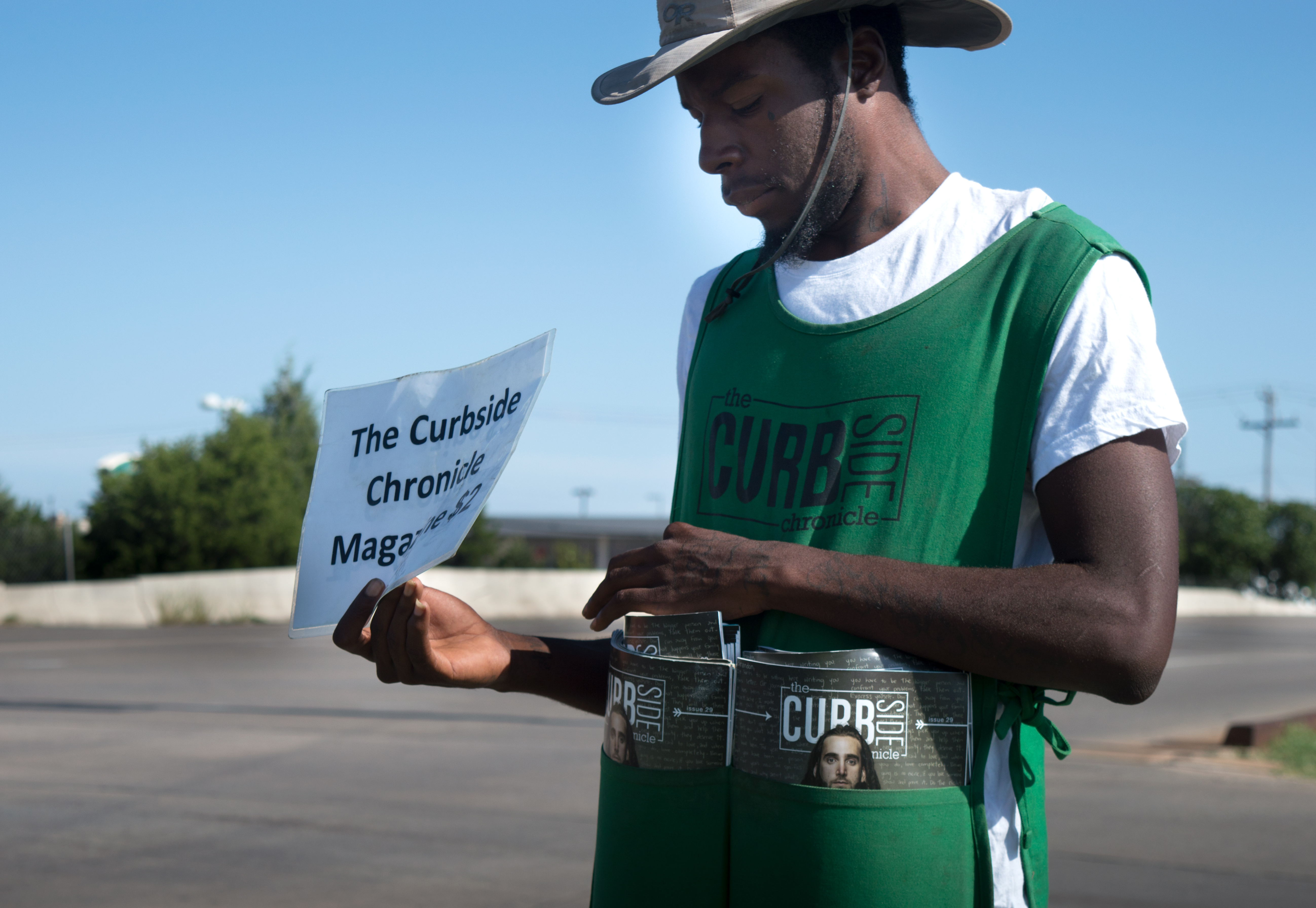 It was already almost 90 degrees when Marquise Benningfield started work on a steamy July Thursday. Like many people who work in the hot Oklahoma summers, he put on a hat to shield himself from the sun. However, Benningfield doesn’t roof houses or pave roads, he sells papers trying to lift himself out of homelessness.

Benningfield was 21 years old when his mom sent him from his home in Tulsa to a ministry in Oklahoma City in an effort to help him overcome a drug problem. “My mom thought it was like a rehab. So she sent me, but it really is like a ministry where you work for free,” he said. Because he didn’t receive treatment, Benningfield’s drug problem persisted, and he was kicked out of the ministry, leaving him homeless.

He had to learn how to survive on the streets for the first time in a new city. “I was in a tent in the woods majority of the time. You have to move a lot because when they get wind of where you’re at, they tend to move you around. I did that a lot.”

Benningfield also started panhandling to try to make money, but after a few months he found out about Oklahoma’s street newspaper, The Curbside Chronicle and met with director Ranya O’Connor. “The role of the magazine is to employ and empower individuals experiencing homeless,” O’Connor said.

The 75 vendors who currently work with The Curbside Chronicle buy their magazines at The Homeless Alliance for $0.75 each and sell them for $2.00 each as street vendors. O’Connor says this process helps homeless people build a work history that can lead to other jobs, but it’s similar to what they’ve been doing.

“It’s kind of like panhandling basically, but you selling something besides with a sign or cardboard or something,” Benningfield said.

In 2015, Oklahoma City Councilwoman Meg Salyer introduced an ordinance that threatened the ability of Curbside Chronicle vendors to make money, and organizers, including O’Connor, worried that it might end the paper.

Salyer said the ordinance that passed in December of 2015 was to address what she called “safety issues” on behalf of the citizens. She said she received calls saying people panhandling for money in the medians were causing problems. The new ordinance prohibited panhandlers from standing in medians less than 200 feet wide.

While the new ordinance may eliminate safety issues created by panhandlers, it also threatened the income source for charities and Curbside Chronicle vendors who used the same medians to make money.

In response to its passage the American Civil Liberties Union and a Curbside Chronicle vendor filed a lawsuit saying the ordinance violated of the 1st and 14th Amendments.

“There are similar ordinances in other states. I tried to present an ordinance that [included] everyone’s concerns with regard to the amendments. Different people have different opinions on whether I did that,” said Salyer.

“It was really scary [to think about] what the future would hold,” O’Connor said. However, she said the Oklahoma City community really rallied around Curbside Chronicle vendors. She also said she and her staff have worked closely with members of the Oklahoma City police department to train vendors to stay out of the medians.

The vendors have noticed the Oklahoma City community’s pride in the paper too. Benningfield says he makes more working with Curbside Chronicle than he did when he panhandled. “I gotten $100 bills with Curbside, but typically it was $1 or $5 or $10 bills [when I was panhandling],” he said.

Benningfield says his customers are more willing to help vendors because of the purpose behind the paper. He said, “They just tend to respect you because [you’re] trying in a different way.”

No Curbside Chronicle vendors have been arrested or ticketed since the ordinance took effect, but Benningfield says he still worries about it because he was stopped by the police for being in the median while he was still panhandling.

O’Connor said vendors were discouraged immediately after the ordinance passed, “It was difficult, there was a decrease in sales as vendors had to move locations and lost the connections from the consistent interaction.”

However, she believes they have overcome the challenges and are stronger now than they were before the ordinance passed.

The lawsuit is still pending in federal district court. Brady Henderson from the ACLU said the discovery phase should be complete in September 2017.

A day in the life of The Curbside Chronicle

"My next steps…well I want to be an electrical engineer, that’s 4 years in college.That’s my long term goal. I’m not sure, I really just want to get ahead, get the stuff I
should’ve had. –Marquise Benningfield

“I still have blisters from walking too much even though I bought new shoes. This is temporary. I don’t know how to be homeless” James + Alicia

“Because I was raped I lost trust in people and now James never leaves my side. I won’t go anywhere without him” –Alicia

"But I definitely want go to school, maybe get a job. Not fast food, but something and still do Curbside regardless, I like curbside." –Marquise Benningfield

“Here are my blisters from walking too much. You never get used them.” –Alicia

“What most people don’t understand is that we have to worry about everything. When we are going to eat, how we smell, where we will sleep for the night and how we will make money. We are constantly worrying.” –Jeffrey Jones

"Because I kind of have a drug problem, I smoke weed a lot and it consumes a lot of
money that it shouldn’t. So I don’t really succeed as much as I should. I get held back I am in
the same spot and I can’t move forward, so I’m trying to deal with that right now. So I can save some
type of money so I can do something different." –Marquise Benningfield

“I joined Curbside because other jobs didn’t work out for me. Instead of sitting around getting drunk they give you an opportunity to do something.” -Jeffery Jones

“I met a lady with her son four days ago during the big storm. It hurt me to see them outside in the rain. I talked to the front desk at hotel that was close by and arranged for her and her son to spend the night in the hotel.That room cost me 60 bucks and that’s why I’m out here working. But I’d do it again. People just need help, you know?” Gregory